Berndsen - "Lover In The Dark" review: 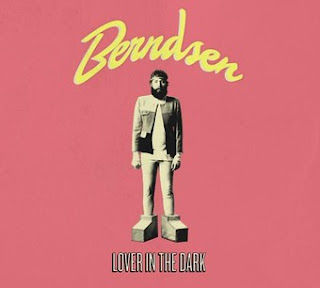 I've never really strayed from the "punk" genres when it comes to interviews and certainly not reviews. But I'm going to make an exception here and it's all because of my best friend showing me a "fucked up music video." The song is called "Supertime" and the artist - David Berndsen from Iceland.
The video was this dude with a red beard and a suit dancing on an upside-down car with his friends pulling the injured and dying passengers out and dancing with them. It was very funny in a real dark way. The combination of the awesome video I had just witnessed and that catchy song I just heard made me want more instantly. About a week later, I found a video for the title track of his debut album, "Lover In The Dark." I was amazed. Sold. Fast forward to about New Years Eve and I get the album.
"Lover In The Dark," made up of 11 tracks and totaling 36:23, starts off with an instrumental electronic intro building up to the title track from the video, "Lover In The Dark."
It feels like you're inside of a game of Tetris backed with dance-y electro-pop. Which rules. In the video, Berndsen's mission is to spread love with a ray gun of sorts. He sees people punching each other, zaps them, and voila! They hug and his heart meter goes up. The message: You're just a lover hiding in the dark.
After that is "Supertime," from his other music video with the bloody car wreck passengers and the dancing. It's definitely the catchiest tune of the album. It's a love song. And there's an amazing breakdown in the song with a bitchin' guitar solo. I love that solo.
The rest of the nine tracks unfortunately are not renditioned with YouTube videos, but in my opinion, they are better than the first two. "Young Boy" is a song about, well, a young boy with too much love to give.
"Radio Frequencies" slows it down a little but has a real strong beat keeping the flow of the album going. I think if it was played in a club, it would be a fist-pumping dance song. For almost five minutes, this track keeps the beat going. Then "Coma." A 0:54-long ambient, sort of slow, spacey instrumental intermission to the album. It picks up real fast with "In Sight." It's a real '80s-feeling tune. Very synth-y. Very poppy.
Then an interesting kind of space-age song called "The Perfect Human" starts up. It's almost reminiscent of "2001: A Space Odyssey," if its soundtrack had turned DANCE! Then it gets danc-y AND robotic. Sure to please your motherboard and your processor.
Then my favorite track is up; "400 Trips." It's another '80s-dance-pop-sounding" tune. But the electronic instrumentals in this song are incredibly catchy and good. It doesn't come in until about 1:15 into the song. But once it does...HOT DAMN! The album then gets a little darker (go figure) with "Dark Times." The sound effects sound like they're straight out of a horror movie. Perhaps one involving a house that is built on a haunted hill. It actually sounds like the level in Mario where you have to evade the ghosts.
The final track on the album is called "On My Mind." It is a great closer. The tune's about Berndsen being alone, still thinking about a certain someone. Kind of sad. Kind of lonely. But it follows the pattern of love, only adding a little loss to the mix. The album then fades to silence.
I recommended "Lover In The Dark" to anyone who is open to something new. Or if you like bands like The Postal Service and The Faint. But beyond all that genre-specific crap are 9 great pop songs that have earned a spot in my heart. It's as if I've been zapped by Berndsen's ray gun...

"Lover In The Dark" video: http://www.youtube.com/watch?v=bAhF9_iB2qs
Posted by squidproquo at 6:45 PM