First off, what the hell is wrong with this weather? The e-mail I got for the Alkaline Trio meet and greet said to be there at three, and I didn't go inside till about five. Anyways, I'm not complaining because it was all totally worth it. I go in, and I hear them playing something, so being the fanboy that I am, I run up the stairs and they were just ending a song that I didn't hear enough of to recognize. Then they dicked around a lot with pickslides and effects and then played "Into the Night" off their latest album, "Agony & Irony." 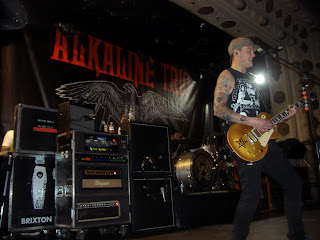 ^"Into the Night" at the Meet and Greet^

After the song, they came down and hung out with us lucky 15 members. It was kind of like Willy Wonka and the Chocolate Factory. Only way cooler and none of us got kicked out for being douches. 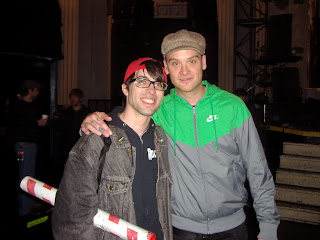 ^Matt Skiba and I. Look behind us, there's Chris Connelly from Saves the Day!^

Anyway, I'm not gonna lie, I brought a lot of LPs. I brought two posters I have had for a long time that will finally go in a frame and on my wall. I have the Halloween at the Metro poster that Paul Frank did and one from their Metro shows withg Against Me! a couple years ago. I think those ones were the ones where they played Goddamnit from start to finish. Maybe? No, I think those were three other shows. I'm not sure. I've seen them too many times to remember. Jeez, I'm only 22, I hope I remember all this cool stuff when I get old.
Anyway, it was cool. They signed my Maybe I'll Catch Fire LP too (Original pressing - orange wax/1000!) So I'm gonna put that one in an LP frame next to my signed Goddamnit LP. Man, my room is gonna look cool once it's together.
Anyway, here's Alkaline Trio's setlist for Monday's 18+ show:

I couldn't find a setlist posted for last night's yet, but they did a new song which was fast, kind of aggressive and had Dan singing. It was awesome. They also played Cringe, Radio, Cooking Wine, Tuck Me In, Calling All Skeletons, My Friend Peter, If We Never Go Inside, Burn, Fatally Yours, I Found Away, Into The Night, The Poison, Sadie, 100 Stories, This Could Be Love, Every Thug Needs a Lady, I'm Dying Tomorrow, Donner Party (All Night)...I think that's it.
Anyway, it was an all-around great night. Met up with some friends afterwards next door for a beer and then hit the road and basically sat in Cubs traffic for a while, which sucked.
Oh, Ed (Kobanes drummer) and I handed out a bunch of fliers for our Gasthaus and Underground Lounge shows coming up. I'm stoked about both of those. Especially the Elgin one because that place is just fun. At least from what I remember of going there a year and a half ago. Last night was a great time. Oh, Death in the Park - not worth checking out. Bunch of hipsters playing bad music. The lead singer was one of those guys that would be emo, but then extra emo by putting his hand out like a "stop" signal. It was weird and a bit too lame for me. Even the all-agers didn't seem to care too much for them. They were selling their CDs for $5 while everyone was walking out, but then a half hour later, I'm standing outside of the Gingerman and they are walking up and down the sidewalk trying to sell their CDs to people. It was a bit weird and the guitar player's freaky mustache probably didn't help their album sales. Alkaline Trio kicked ass. Saves the Day was OK because they played some old stuff I used to listen to. The first band sucked.
Anyone know where I can get semi-cheap poster frames by the way? Preferably a store and not the Internet? 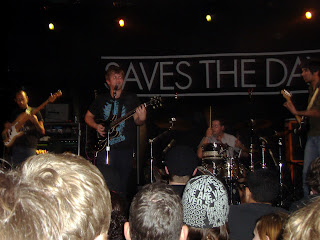 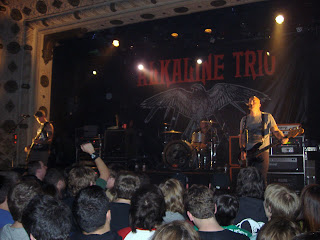 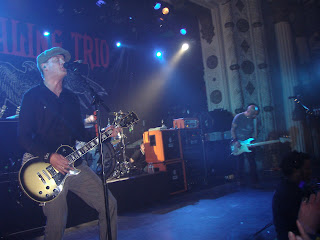 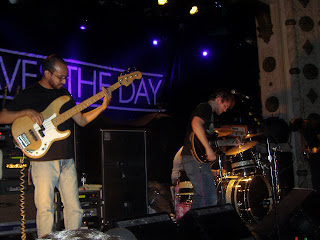 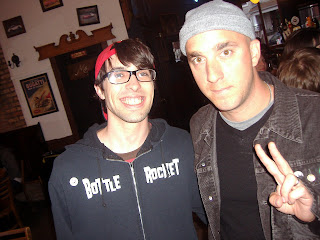 ^Me and Dan before the show on 4/20/09 at the Gingerman. We were watching the Bulls lose to the Sonics. Well, he was. I was too busy drinking and trying to get the balls to ask him to take a photo with me^
Posted by squidproquo at 8:00 AM 2 comments: