Q&A with Ryan Young of OFF WITH THEIR HEADS

While Ryan was in the studio recording Off With Their Heads' next record, he took some time to chat with me about the new record coming out on Epitaph Records as well as a bunch of random shit.

Squid Pro Quo: I listened to "Listerine" today (via www.myspace.com/ryanyoungowth). I dig that. That's going to be an OWTH tune?

SPQ: Now that you guys are on a bigger label, how's the sound? Kinda keeping that momentum with "From The Bottom"?

Ryan: It will be a little better than that. We have two weeks in a crazy good studio as opposed to three days in a shithole, so we have time to make it rule.

SPQ: About how many songs are you guys lookin' at having on there?

Ryan: We are recording 15, but I dont think they will all go on there.

SPQ: Cool man. Do you guys have a name for the album yet?

Ryan: Not yet. We usually take the album name off some lyrics from the last song. Haven't gotten that far yet.

SPQ: Oh, neat. Where are you guys recording it?

Ryan: We are recording at The Terrarium. Dillinger 4 and Banner Pilot did records here.

Ryan: Yeah it does. This one will be even better because those dudes are mastering it at some crazy expensive place.

SPQ: Shit yeah. So what next? Awesome tours? I know you guys toured with Against Me! semi-recently. More stuff like that?

Ryan: Nothing much planned yet. Just that couple months touring starting in February.

Ryan: Except for the dates with The Queers.

SPQ: Oh, no way. Are you guys coming through Chicago with The Queers?

SPQ: Word. So how did this thing with Epitaph end up? Did they just randomly discover you or how did that work?

Ryan: Brett (Gurewitz) called me last year and said he was a fan. We chatted for a while, went and had pizza at his house when we were on tour, visited the office and he basically gave us a really good offer that we would have been dumb to turn down, especially with the decline of record sales.

SPQ: Awesome. So how come it's not "official" yet. Just needs to be announced kinda thing?

Ryan: Yeah, they wait for the right time or something.

SPQ: So here's a cliche question for ya: where do you guys get influence from? Most songs seem like just personal events/situations. Still doing that?

Ryan: Yeah. It's all the same.

SPQ: So what's the lineup for the recording? And will it stay the same for the touring?

Ryan: It's Justin, Zack, Nate (Gangelhoff) and I and no, it changes for touring.

SPQ: With so much time on the road, how do you find the time to write?

Ryan: I write about as much as I did before we toured all the time. It either comes to me or it doesn't and when it does, it happens fast.

Ryan: I guess so. Probably just the weed though.

SPQ: I had to take a hair test for my job now. It's retarded how some employers are.

Ryan: I think I would be unqualified to work any kind of job. I'd ruin the drug test lab.

SPQ: What's been your biggest obstacle over the years?

Ryan: Probably coming to terms with the fact that this is just what I do and I'm not really good at anything else. I always kinda wonder what I would be doing if it weren't this, and it's always something much less meaningful or completely worthless. At least I'm doing something that most people won't get a chance to.

SPQ: Realistically, what do you think you'd be doing if it weren't for playing music? Or even not-so-realistically. Hell, what did you want to be when you were a kid?

Ryan: I've always wanted to do this, so I guess I win. It isn't nearly as glamorous as it might seem, especially with the record sales being way down. If we were doing this 10 years ago, I would probably be pretty well-off. If I weren't doing this, I'd be painting houses.

SPQ: Probably better money in painting houses, haha. But also probably not as gratifying since you've always wanted to play music. Gotta live your heart. That's good! Man, playing music 10 years ago would be cool. Just when the illegal downloading of music was in its infant stages...

Ryan: Yeah. I would actually make more money delivering pizzas two days a month than being in this band. We have been touring for six years. I didn't start getting paid anything until last year.

SPQ: So all the show money just went to food and gas?

Ryan: Yeah, and that didn't cover it. We are still out years of paying for all that stuff. Even with From The Bottom selling around 10,000 (copies).

SPQ: So you've really gotta "make it" in order to actually MAKE anything these days.

SPQ: Well, hopefully with Epitaph, you guys take off. I know they push the hell out of their catalog with street teams and a wider distro and all that.

Ryan: Yeah, we'll see. I'm not sure if the masses are ready for this kind of music. Especially the masses that Epitaph deals with. It's clearly different than that other silly stuff they put out over the last while.

SPQ: Not the ol' California Warped Tour garbage, eh? That's comforting. Well, hey man. Maybe it'll be a tide of change and you guys will pioneer it.

Ryan: That's what I'm hoping for.

SPQ: Aside from Epitaph, what's been the best part of fronting OWTH over the years?

Ryan: I'd say getting to meet all of my "idols". That's pretty awesome.

Ryan: The Fest shows the last couple years were rad.

SPQ: I saw the video of you and Paddy where you burned the money, haha. That shit was hilarious.

Ryan: We are dumb together

SPQ: Hahaha. Committing crimes on camera. Tsk tsk. Do you have any pet peeves? Or anything while touring that you don't like?

Ryan: TONS of shit. You just get overly sensitive about little things when you spend too much time with anyone. Once you realize that, you see that it's not a big deal.

SPQ: Speaking of, you guys have women? How does that work with you all being so busy on the road? Is it just different chicks every night? Banging in all 50 states-style?

Ryan: Hahaha. I have a girlfriend. Same one for over the last year and a half.
It's fine. I don't really like hooking up with random girls. They usually suck.

SPQ: That's the best part! I guess only when it's with their mouths. What are some of your favorite bands "today"?

Ryan: I don't really like much current music. I like gangsta rap because it's funny. I like pop music for the same reasons. Lady Gaga rules.
Posted by squidproquo at 4:07 PM 2 comments: 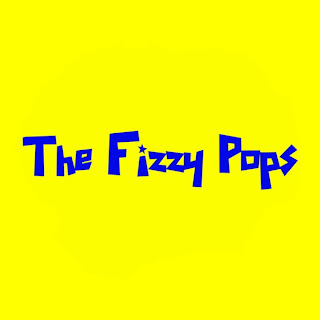 Finally - some good pop punk by teenagers and not 35-year olds! The Fizzy Pops, from the western 'burbs of Chicago, released its debut, self-titled album in December 2009 on Throw Up Records.
The trio alternates vocal duty between bassist Luke Ostojic and guitarist Caitlin Ferraro. Their tunes channel influences from early Green Day, Screeching Weasel and The Queers. It's especially noticeable when Caitlin busts out the catchy, poppy solos leading songs like "Friday The 13th" and "My Boss Is a Weirdo." Unlike a lot of pop punk bands, the bass player doesn't follow every note the guitarist does, which is refreshing. The two instruments play well off each other, almost giving some of the tracks a hint of ska influence. A confrontational tune, "Weasel," is led by Cait (which may or may not be about Ben Weasel). Not sure. Then some tunes, like "Loose Screws," almost seems to pull more of a Vindictives influence than anything else, combining a fast beat and snotty and somewhat non-traditional, "unpretty" pop punk vocals. I recommend this album to anyone who is a fan of any of the aforementioned bands. And The Muffs, cause sometimes Cait's vocals remind me of Kim Shattuck's. Also, these dudes (and dudette) are fun to see live - very full of energy!

TOP TRACK: "Friday The 13th"
Posted by squidproquo at 8:45 PM No comments: