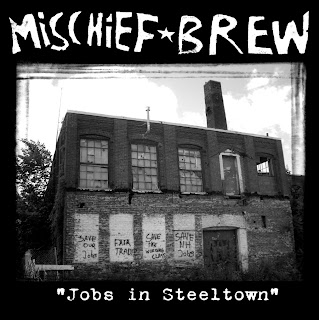 Overgrown weeds engulfing a family's dilapidated former home.
A cracked-up vacant parking lot.
An abandoned factory with most of its windows broken.
If that vintage mindset intrigues you, you might like Mischief Brew's new 7'', "Jobs in Steeltown."
There are only two tracks on this one. Side A has "Jobs In Steeltown," which is a bittersweet song about an old Pennsylvania (I assume, since they are from Penn.) steel town.
Places in Pennsylvania like Pittsburgh, Midland, Aliqiuppa and Ambridge were/are all steel towns and after doing a little Internet scavenging on these places, I couldn't help but associate the industrialized towns with Chicago's once-heavily industrial south side.
To this folk/punk tune, guitarist/vocalist Erik Petersen sings, "They need food-spooners, janitors, and prison guards/And they look out and I look in, sometimes I forget who the prisoner is."
The dynamic here is interesting. The chorus of the song is about how there are no jobs in "Steeltown" anymore, but the bittersweet part is that there are jobs; depressing jobs that do not feed productivity, rather maintain some sort of sad, working-class population stuck in the days long gone.
Mischief Brew is considered to be an anarcho-punk band, a genre I'm not really familiar with. I looked it up and found a history and discovered that many of the bands I like and even mainstream ones like Against Me! fit into this category. It seems to be a history full of DIY ethic and individual "lifestylism." It seems to be very anti-establishment as well, like the traditional punk beliefs, only this anarcho-punk genre seems to want to keep the aspect of individual importance and pride first and foremost.

Side B has a track called "The Barrel," which, to me, is a very metaphoric song. The song is about his "candy shop." Petersen sings as a scavenger, picking through flea market goods in search of treasures others overlook.
Petersen's lyrics have a hopeful underbelly to their surface pessimism. Or maybe not pessimism, but bleakness.
"Raid the scrapyard like a garden, wring life from rusty bones/My candy shop is a vacant lot where anything may grow." It begins with a bleak outlook, but finishes with a sort of, "OK. I'm surrounded by decay, but does it have to be ugly? And why do things have to be this way and that?" That's the message I saw, anyway.
Towards the end of this dark-yet-hopeful redemption song, Petersen sings, "Your scrapyard, my garden, or so the saying goes/You turn water into dead things and I'll make the dead things grow."
That verse didn't make sense to me at first, but after some thought, it's a powerful line to end the song. Everyone knows dead things are, well, dead. And with water symbolizing life, Petersen is simply saying, "You turn life into death, well I'll turn death into life." Very poetic, I dig it.
Mischief Brew has proved to be not only musically talented, embodying that folk/punk sound, but conveys strong themes and perfectly highlights the dynamic between life and death, rich and poor, and past and present.
Fans of early Against Me!, Leftover Crack and the World/Inferno Friendship Society would really appreciate Mischief Brew.
Posted by squidproquo at 6:29 PM No comments: 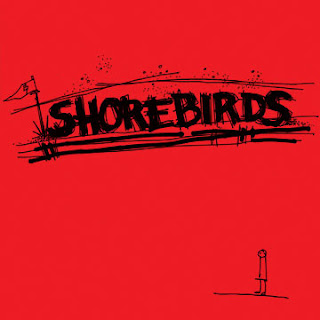 A few weeks ago, I came across a MySpace band site and had never heard of them, but something caught my eye.
"What's that say? Jawbreaker?! Latterman? Damn, I didn't know any of those guys were doing anything with music anymore. I thought they called it quits!" (And then I came to realize after reading the band's description on No Idea's site that it sounds like Shorebirds isn't even a band anymore).
I saw Chris Bauermeister from Jawbreaker's name along with Matt Canino, vocalist of Latterman, on that site, which belonged to a band called "Shorebirds." Immediately I gave it a listen and it was love at first sight (so to speak, of course).
Canino from Latterman does the vocals for Shorebirds, by the way. So if you like Latterman, Shorebirds will be to you like The Broadways sound to Lawrence Arms fans. Or how The Mopes are to the Methadones. You get the picture.
Track one on the 7'' is called "DOA," and it's about getting older and waiting around. Canino outlines pretty well the uncertainties about passing the time. Between the strong, steady power chords and the slowed-down note playing and fluctuation in Canino's voice, you get a sense of helplessness. He's waiting around for his friends - it's out of his control. It keeps raining and raining - out of his control. He even talks about something we're all familiar with - trying to get a certain someone off your mind. That can be the hardest thing of all. My favorite part is the end, after Canino sings throughout the song about waiting for his friends. He finishes the song by saying, "My friends have shown up right at the front door." And that's when the music - and the waiting - stops and a new song begins.
Track two is called "Tinctures are 90% Alcohol." For those like myself who aren't quite sure what a tincture is, it's an alcohol solution of nonvolitile medicine such as a "tincture of iodine." It's also a color, like a tint or a pigment. Which is interesting because he could just be singing about blurry vision in this alcohol-soaked song.
This one radiates uncertainty and a bit of insecurity. Canino yells "I don't know what to do 'cause I can't stop thinking of you/I don't know where I'm gonna sleep tonight...my floor is covered in beer." His words paint the scene of a party. Broken glass everywhere. Beer all over the floor. Not knowing where he's going to sleep that night and not being able to get someone off his mind. It sucks. But it's good to listen to. It really gave me an "Ah, so I'm not the only one, huh?" feeling. But the lyrics sound more than anything like Canino's trying to drink a girl away.
The third song, "People I Live With," is sad, in the way that you feel bad for Canino. This one's about walking around lots of people, not being able to identify or connect with anyone. Being ostracized. Outcasted against your will. He sings about not getting along with people he lives or works with. But he says he's only trying to survive. He sings about being ashamed and without admitting it, about hurting people he's loved. But the song is not a complete bummer and outpour of empathy on Canino's behalf. He redeems himself at the end of the song, mans up so to speak, repeats the chorus and adds, "I've done some things that I'm not too proud of/And you never want to hurt the people you love/Sometimes you gotta look them in the eye and apologize."
The last track, "Down in Denver," is a fast song - only 1:37 in length. It keeps the theme of helplessness, but in a more upbeat fashion. He sings about watching Denver decay and how when he was there, all he did was die. As pessimistic and negative as his words come off, Shorebirds is amazing. I can't stop listening to these guys and I recommend it to everyone. I'm addicted to that feeling I rarely get from bands that's like, "Hey. Shit's fucked up. I have a fucked up life. My friends are pretty fucked up too...and I don't know how to handle a lot of things." I'm addicted to the sense of belonging there; that huge gap of admitting things like that, and putting it to music is powerful to me. And therapeutic, in a way.
Fans of The Broadways, Hot Water Music, Latterman, The Draft and of course, Jawbreaker, need to check this 7'' out. Shorebirds hooked me real fast. Get it at No Idea Records for 3 bucks.
Posted by squidproquo at 12:27 AM No comments: 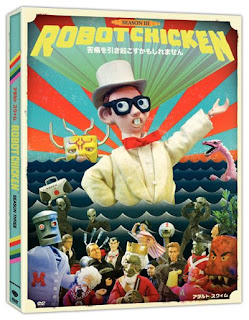 Usually, when comic book nerds get together to play with action figures, it's at the national Comic-Con convention or in the privacy of their own place - and that's if they even open them, fearful that they'll decrease in value.

When you get a bunch of them together, throw in stop-motion photography and witty jabs at pop culture, you get Robot Chicken.

With each episode lasting only 11 minutes, the show gives the viewer a real short and sweet experience.

The episodes move fast and generally have no plot.

On the second disk of the Season 3 DVDs, we see Paris Hilton throw up in bed saying, "I love sex and Johnny Walker!" to which the camera reveals Jimmie Walker, who coined "Dy-no-mite" from "Good Times." Following, is a newscast about celebrities going to rehab. In rehab are Britney Spears, Lindsay Lohan and Hilton, all of whom are actually aliens, fueled by alcohol with a mission to destroy the human race.

Paris' assignment is to kill President Bush, and she is seen doing so - only it is George Bush Sr.

Barbara Bush jumps out and engages in a fight scene with Paris, ultimately breaking her neck with a roar of victory.

For anyone who knows enough about pop culture to follow it, but hates it at the same time, Robot Chicken is the perfect show.

It's one of those shows that makes you laugh out loud when you're alone.

One minute, Conan the Barbarian breaks out in song, the next minute, a gigantic carrot bursts from the ground and tears a rabbit to pieces. If everyday life of TV, the Internet and being fed constant advertisements hasn't given you attention-deficit disorder already, Season 3 of Robot Chicken will.

At the very least, it will leave you clucking with glee.
Posted by squidproquo at 3:52 PM No comments: