Them Krooked Vulvas/A Perfect Circus featuring members of Alkaline Trio and Kill Hannah with The Coldspace at Debonair (8.18.09) 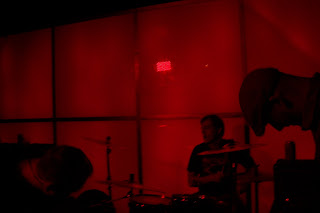 It was a nice Tuesday night in the city and I didn't expect to see my favorite band. The day before, 97.9 The Loop went to commercial so while I was driving, I switched over to Q101 and to my surprise, found Matt Skiba and Derek Grant of Alkaline Trio, Scott Lucas of Local H and Greg Corner and Jonny Radtke from Kill Hannah being interviewed by one of Q101's DJs. They were talking about forming a cover band for Tuesday night for RedHairMatt's birthday party. RedHairMatt is a bartender at Debonair in Chicago and has bright red hair.
So the DJ says call in to talk to any of them so I gave it a shot and after a minute or so of ringing, the DJ answers and I ask him, "Hey, can I like...talk to Matt Skiba or something?" Little did I know they were all listening in and Matt says, "This is Matt Skiba or something."
"Hi Matt Skiba or something!" I said like a stupid girl.
I asked him what covers they were going to play at Debonair and they chattered and said you had to show up to be there. They said something about liking Alkaline Trio and I was like, "You are my favorite band. See you there" or something along those lines.
Anywho, I get to the venue and get the $5 PBR and Jameson shot special to ease my nerves. The first band of the night consisted of Scott Lucas from Local H and three other guys and they were called The Coldspace. 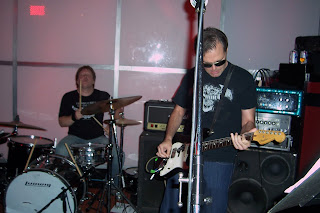 They did all covers by Black Sabbath, Kings of Leon, Iron Maiden, Kelly Clarkson, Daft Punk, The Stone Roses and finished with Local H's "Wolf Like Me." They put on a great set - not so much if you came to see punk but what a bunch of talented musicians. Scott Lucas remains to be one of my favorite musicians/entertainers to this day. 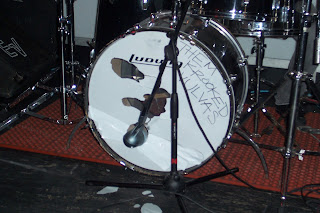 Another beer and shot of Jameson later, Matt Skiba takes the stage with Derek Grant and Greg and Jonny of Kill Hannah. They start to play "Dancing With Myself" by Billy Idol and Matt Skiba even does a little dance. The set continued as follows: 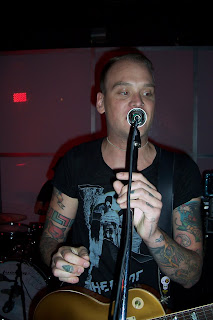 Anyways, "She Sells Sanctuary" by The Cult was next, followed by "Lucretia My Reflection," which Alkaline Trio actually covers on a Suicide Girls compilation CD that I believe was released in 2005. I think that was the first time I've ever seen them play that live thought, which was awesome. Oh and I almost forgot to mention - after the cake business, Matt and Derek traded places so Derek sang and played guitar to "She Sells Sanctuary" and "Lucretia My Reflection." 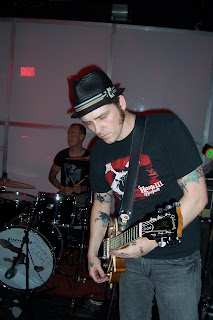 Matt took the drums - not everyone knows he was actually a drummer before he was a singer or a guitar player in Chicago bands like Blunt, Jerkwater and The Traitors.
Anyways, Scott Lucas came up and sang "People Who Died" by Jim Carroll with Matt Skiba. Scott was his usual self, climbing shit and rocking out. After the song, Skiba said, "So that's what punk rock feels like."
They finished their set with a cover of The Misfits' "Skulls," which is covered a lot by The Methadones and The Lawrence Arms as well.

Strangely, Greg and Jonny stepped off the stage and what I wished to myself came true. Out of the corner of my eye, Dan Andriano took the stage with his bass and the crowd of about 200 went nuts and I was within an arm's reach of Skiba. Not even a stretch of a reach. They played "Cringe," the first song off their first album, "Goddamnit." Which is just as well, taking it back to the roots, especially since the Trio is in town recording a new album at Atlas Studios with Matt Allison.
After the crowd (and RedHairMatt) urged them to play just one more - they did, and it was "My Friend Peter" off the band's self-titled 2000 release. The crowd went insane. If they had played a full set, the venue would have surely collapsed, leaving only the energetic crowd standing amidst the rubble rocking out and singing along to their favorite band, Alkaline Trio.

I dunno if there's a better picture of Matt out there than this one: 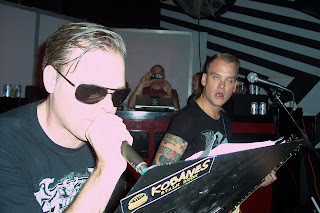 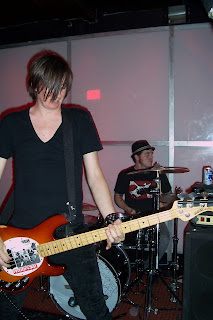 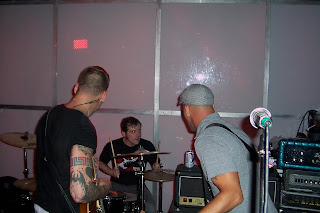 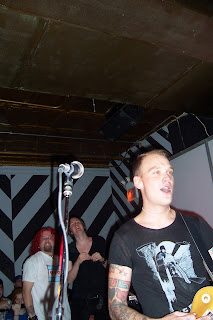 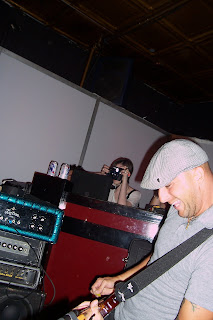 I don't know how many people actually read this, but a couple of you know I play bass in a band called The Kobanes. The other day, Mark, Eddie and myself went to a travel agent and bought some plane tickets to Tokyo for September 18. Nonstop flight from O'Hare and everything. We were given the option to stop in Texas for $62 less but having to get your stuff, go through customs and then re-do all that in two hours all while risking the safety of our guitars seemed a little much. Anyways, a nice sum of money's worth later, we're going to Japan to play six shows in about a week and a half.

We're going to arrive September 19 in the afternoon sometime and stay the night in Tokyo. On the 20th, we're playing some festival in Tokyo with over 30 bands, which is gonna be rad. Here's the itinerary the dude from the label sent me:

I have a Japanese neighbor who keeps asking me for a CD and an itinerary and stuff and I keep hesitating to give it to her because a lot of the lyrics are pretty offensive but she seems rad enough. She said she used to go to Anthrax shows so that's cool. Anyways, that's the Japan tour part. Now I'm going to talk about the new album actually called "Japan Invasion."

It's gonna be 11 or 12 songs. Five of them are up on the MySpace player now. This is the artwork: It's in the works but that's it more or less.

Kobanes Theme
Please Don't
You Are The One
Ice Scream (Instru-mental)
Population: One
I'm Not Right
Nobody (Chixdiggit! cover)
I Can't
Fan Mail (The Dickies cover)
Me Vs. Myself
A new fast Queers-style song

A lot of those aren't even named yet and I might be missing a song in there but yeah that's pretty much what the album is going to look like (and not in that order). Fixing A Hole Records and Dumb! Records I think are going to do the same thing they did with the first album and co-release it. Both labels are out of Japan and fucking rock. Hopefully this album goes over well. I'd like to send out a bunch for review to Maximum Rock n' Roll and other mediums of the sort. I'll share my review here and talk about the recording process and all that fun stuff when the time comes but for now, I have to learn that new fast Queers-style song and it would be nice to write another one. Also, Knowhere Records expressed interest in putting out a Kobanes 7'' so we might do two or three songs there. One of which will be a Sheckies cover of "Then She Got Married." Mark wants to do that one really bad. Also I'm going to learn "She's The One" by The Ramones...we'll probably play that in Japan and at shows. They used to play it before I joined the band but that is actually one of my favorite Ramones songs so yeah, that's about it for now. Expect a new CD in about a month or so and if we get lucky maybe a nice label will put it out on vinyl! Oooohhhhhhh.
Posted by squidproquo at 10:00 AM No comments:

By JASON DUARTE For The Sun

"I can assure you that if it said for other reasons, the district never would have conveyed this property to the city," Mitchell said. "We cooperated with the city. Now as the president of the forest preserve said, we get a slap in the face."

Dan Voiland, Naperville's telecommunication manager, said out of the three spots they looked at, two have been leased out by the city, leaving the Plainfield-Naperville Road location the only alternative.

Naperville resident and forest preserve volunteer Joe Suchecki spoke in opposition to the proposal, saying the aesthetic impact it will have on the grassland will be a detriment to birdwatchers, joggers and anyone who goes to the forest preserve. The firefighters are also opposed to the placement of the cell tower, Suchecki said. No one from the Fire Department showed up to speak on the issue.

"There has to be better options," Suchecki said. "It doesn't seem the city has made other efforts."

Suchecki also commented on how it would increase bird mortality rates, saying that since birds migrate mostly at night, they can be forced down under certain weather conditions during flight and hit the tower.

Voiland said the Plainfield-Naperville Road location is optimal because it will not only serve its purpose connecting DuPage County's and Will County's emergency systems, but broaden cellular service range.

The staff supported it, saying the monopole design is the least impacting style of tower and the structure is designed to withstand and exceed wind capacity for the area.

Ultimately, the board voted against the construction of the cell tower, with Bill Jepson, Reynold Sterlin and John Herzog supporting the plan.

"Public safety is critical and environment elementals are critical," McElroy said. "Springbrook is a true treasure. Eighteen-hundred acres in the middle of a mid-sized city is amazing and it needs to be protected."

President Mike Brown commended Voiland on his work, saying they found the best possible place with regard to his job but not with regard to the impact on Naperville as a whole.

"In my mind, we are violating the spirit of that agreement and I have a problem with that. I think we can satisfy the requirements elsewhere."
Posted by squidproquo at 4:26 PM No comments: