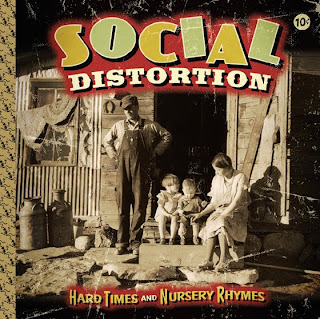 Social Distortion released its first album in 7 years titled, "Hard Times and Nursery Rhymes." In the 33 years Social D has been a band, they've blossomed from their Orange County punk roots, cross-pollinating with blues, rock 'n' roll, and a little outlaw country, making them a well-versed hybrid.
Social D's last record, 2004's "Sex, Love and Rock 'n' Roll," was a soundtrack of love and loss. He said in an interview that he wanted this one to be different. The album features 11 tracks, some of which the band has been playing live for several years, but all are finally recorded.
The album opens with instrumental track, "Road Zombie," going into guitarist/vocalist Mike Ness's first reminiscent story, "California (Hustle and Flow)." In this song, for the first time, a Social D tune has female backing vocals. I thought it was interesting, and being early-on in the album, a small part of me thought, "Ruh roh, this is going to be one of those 'over-produced' records, isn't it?" But listening through it, I realize Social D's had pro production for years and it's beginning to sound like more of a jammed-out Social D record rather than a harder-hitting, heavier, in-your-ears album like "White Light, White Heat, White Trash" was. Not to discredit that album, as it's one of my favorites, but it's evident that Ness and the guys are purposely taking it easy with this one, creating an ebb and flow.
"Alone and Forsaken," is a Hank Williams cover, and the only song on the album not written by Ness. It's Social D doing outlaw country with gain and distortion. It's a good cover, but a bit too reminiscent of their past homages, "Ring of Fire" (Johnny Cash) and "Under My Thumb" (Rolling Stones) in that they stay pretty true to the song's original progression, only making it a little heavier and with Ness's signature gritty, edgy vocals, topping it off with that early punk feel.
The band's first single off the album, "Machine Gun Blues," was played live on Conan January 18, which was the band's first time in their career playing a song live on TV. The single is an anecdote about a day in the life of a gangster in 1934. Winos, junkies, pimps and whores are themes Ness has been visiting and revisiting for years. Whether or not he's as hard as he comes off in his music is something I cannot verify, but he has a knack for "tellin' ya how it is." My ears pricked up to an example of Ness's classic anecdote-between-songs during "Bakersfield," where Ness takes a break from the melody and says,
"So I walked out that lonely truck stop with my head hanging down, wonderin' how in the hell I got myself into this mess and more importantly, how I was gonna get myself out of it. So I wrote a song for you, baby girl and I hope when I return home, the locks ain't changed on the doors and there's still a spot for me on that big ol' California king-size bed."
I haven't been to a Social D show in at least three years, but I've seen them at least six times and Ness has an affinity for telling stories of the hard times he's been through (many are the same), which perhaps came to a head in 2006, when he began writing new songs for "Hard Times and Nursery Rhymes."
Overall, the album is evenly blended with darker and lighter songs, heavier and softer; audible sinning and redeeming tales, creating a duality not new to Ness's songwriting, but hard to come by on most albums. I mean that a lot of punk records stick to a main theme (past Social D albums included), and it's uncommon there's a dark song and then a slower, bluesy, jammed-out tune with a piano solo. I give this album 3.5 stars out of 5. It's a nice blend of the Social D we all know and love and a more mature and evolved Social D, embracing and also emulating a broader range of influence on the new record. I recommend all Social D fans pick this one up and if you're open-minded enough about a band you love doing different things and experimenting throughout their career, this could be your favorite Social D record yet. But at the same time, there will be those who swear it's their worst because it's not "Mommy's Little Monster" or "White Light, White Heat, White Trash." It's got the blues and outlaw country influences of "Somewhere Between Heaven and Hell" thought, so if you dug the transition between the self-titled and "Somewhere Between Heaven and Hell," chances are you'll get into "Hard Times and Nursery Rhymes."

Hard Times and Nursery Rhymes:
1. Road Zombie
2. California (Hustle and Flow)
3. Gimme the Sweet and Lowdown
4. Diamond In the Rough
5. Machine Gun Blues
6. Bakersfield
7. Far Side of Nowhere
8. Alone and Forsaken (Hank Williams)
9. Writing On the Wall
10. Can't Take It With You
11. Still Alive

"You know what makes me feel unsafe?" By Lauren Measure 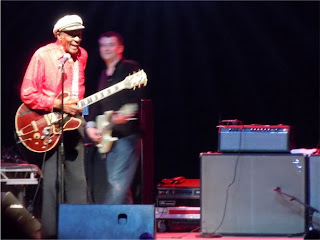 Octogenarian rock n' roll icon Chuck Berry collapsed in disappointment
at his keyboard about an hour into his set on New Years Day at the
Congress Theater in Chicago.
He opened the show with "Roll Over Beethoven," but the show quickly
took a turn for the worse as Berry would just stop playing mid-song.
He became obviously frustrated with his backing band, whom he never
practiced with. The band seemed to do everything it could to follow
Berry, but it wasn't enough. Berry kept changing songs mid-song and
then tuned his guitar for half the show, either stalling or being
legitimately out of tune the entire time. He walked over to the
keyboard player, and would hit the keys, to tune to the notes and then
told the keyboard player his keyboard was the one out of tune.
"I'm not saying it's your fault," Berry said.
It was horribly sad witnessing an 84-year-old man's intent and then
watching him struggle and fail to deliver. He walked over to the
keyboard, sat down and started playing/hitting keys, and then slammed
his hand on some low notes and put his head down for a minute before
being walked off stage by the Chicago Fire Department. When he came
back out later, he said he had "no strength." He looked defeated. We
were all thanked for coming out. Most of the people left. My friends
and I stuck around with a bunch of others and towards the back of the
stage, Chuck suddenly walks out, puts his guitar on, and tries to
play. Every one of us who was behind the fence in the pit hopped or
ran through it, rushing the to front of the pit, standing on chairs
and crowding the front of the stage. The Chicago Fire Department took
him off stage again, and we were told they were running some tests,
and if we could wait for 15 minutes, he might come back out and play
for us. We roared, cheered and applauded for Chuck as the Fire
Department took his blood pressure and ran some tests. As we all
hoped, he came back out about 15 minutes later, saying someone took
his guitar. He took the microphone and apologized. He said when he
collapsed over the keyboard, he felt he had no strength. He then said
he felt like he was "at a 10, maybe 15." He said after they ran the
tests on him, he now feels like he's at "a 65 or a 70." We cheered him
on more. People were shouting, "We love you, Chuck!" The Fire
Department and what looked like his manager among others were alertly
watching him as he took the microphone and said, "You wanna see me do
my scoot!"
What was left of the crowd, which previously rushed through the
barriers and to the front of the stage, roared with applause. Chuck
Berry did his signature duck walk, despite being told he shouldn't and
for the last time, was escorted off the stage. I felt like everyone
held their breath, afraid he might fall in his weak state, but after
he did it, I felt a burst of happiness. Here's Chuck Berry - the man
who created rock n' roll - at 84 years old, struggling to deliver a
performance on New Years Day in Chicago. He couldn't and it seemed
like the night changed when he did his "scoot." He didn't admit
defeat. It seemed like he knew what might happen if he did the duck
walk and he did it anyway. This may not be at all the case, but in his
face, I saw a man who would rather take a big risk doing what he loved
than succumb to old age and be carried away in front of his fans. Hail
hail rock n' roll, Chuck Berry.
Posted by squidproquo at 2:27 PM No comments: