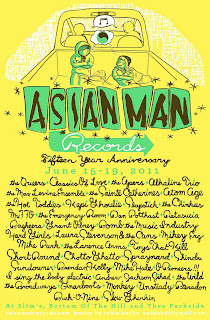 Squid Pro Quo is going to San Francisco! Er-is in San Francisco I should say, for the Asian Man Records 15th anniversary festival! As I'm typing this, I'm 36,000 feet above sea level and Chicago is a distant anthill. I awoke sharply at 3 a.m., and got a ride from my roommate's dad to O'Hare International Airport, where we parted ways, and I headed to security with my essentials on my back. As I made my way to the place where they touch you, then yell at you for ejaculating, I ran into Katie Hovland – Chicago concert acquaintance and Jaded In Chicago photographer. We reveled in excitement to see Slapstick before the sun awoke in a sleepless, exhausting state, and then we passed through security. The other half of Jaded In Chicago, Bill, met us on the other side, as he actually works at O'Hare. The three of us trekked over to the food court near our C gates, and I got the cheese danish. I walked back to their gate with them, as their flight was scheduled to take off an hour prior to mine, and we talked music, travel, work, all the while crossing our fingers as the rain fell, the lightning flashed and the thunder rumbled. Katie and Bill's flight began boarding, and they got their two standby seats. I began heading across the way to my gate, when I thought it wouldn't hurt to ask if their flight was one-way or if it had layovers. The ladies said it was one-way, and I asked if they knew if the weather was going to improve. The one woman said it was supposed to get worse and that last week, they had a line all the way down the corridor. “Really?” I said, “Because mine's supposed to take off in an hour.” I asked if it was possible to hop on this one, as I already had a ticket for the 7 a.m. flight. She typed a bit and told me there was a $75 charge. “Ah, OK. No thanks,” I said. I began walking to my gate, and I hear the woman yell something. I wasn't even sure if it was at me, but I turned around and she waved me back over to the desk. She said she'd waive the fee because they want to get as many people out of the airport and on their flights as possible, and seated me next to my friends, Katie and Bill.

What luck! I stepped on the airplane, waited until the lightning cleared the area, and here we are, chugging along to San Francisco, California! Now I don't want to make this too rambling and off-putting, but I haven't seen a whole lot west of the Mississippi River, especially as far west as one could get. So the last couple of weeks have been nerve-wracking. Don't get me wrong – I'm super excited to get there and go to these shows, but I'm just as excited to see San Francisco and be as much of a tourist as I possibly can. I looked at the surrounding area via Google and noticed the Anchor Brewery is right by the venues I'll be frequenting all week. Being a homebrewer and avid beer connoisseur (so I pretend, anyway), I am excited if not to take the brewery tour, then to try a few fresh, tap beers. The weather's supposed to get up to 73 degrees today, so I am excited for that. I'm excited to be near the ocean. I'm excited to fill my lungs with slightly salted air. I'm excited to not be at work this week. I'm excited to get out of the Midwest. I'm excited to cross off a few more bands on my list of “Bands I Thought I Would Never See.”

I'm excited to meet and spend some time with Mike Park and my friend Mike Yannich and my roommate and his brother. I miss my other half, Susanne, already and know I will until I return, but I have her with me in spirit. That doesn't make me miss her less, but makes me feel better about getting to explore without her with me. I can't wait to tell her all about everything. I'm going to try to add to the hour and a half/two hours of sleep I accumulated last night. Stay tuned to us and Jaded In Chicago as well. They have some KILLER material coming and I can't say I'm not a bit envious. Westward!