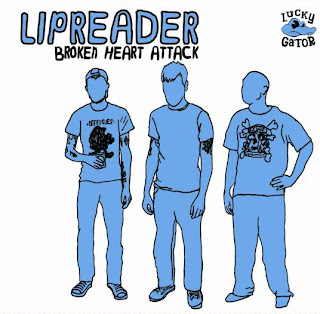 In my last review (Noise by Numbers - Over Leavitt), I mentioned the growing influence of the 1990s resurgence and how it could be a bad thing. This time around, I’m getting a '90s vibe that I’m not bummed out by even though I probably should be. Lipreader’s (ex-Das Kapital) Broken Heart Attack 7” out on Lucky Gator Records presents four songs with a sound reminiscent of Jawbreaker or a less political Broadways. I think I like it better because Lipreader doesn’t sound like they’re trying to recreate the signature sounds of their influences, but instead take that sound and make it their own.
The record starts off with a bit of a snoozer, “The Next Train Home,” but it’s over before you get a chance to really give it much thought. The next track, “CHOKE,” brings it back up with a song about the ex-girlfriend that can simultaneously make a guy want be with her as she is “choking out all the life I have left.” Depressing as it sounds, this is a song I kept going back to. The band’s own description of: “Sad songs. Happy guys.” is pretty accurate. The last two songs, “Blankets and Sheets” and “Sleeping In,” are also really good and almost sound like a toned-down Off With Their Heads. All songs are available streaming on the band’s MySpace, two are up for free download at Lucky Gator Records' site and the 7'' is available for $5 here.
Posted by squidproquo at 9:44 AM